Once again our small blog project Geeksisters ran into issues with copyright: Ironically, the reason this time is the extreme well-known meme „Socially Awkward Penguin„. Already three years ago
we introduced a few versions of it in this blog entry and of course we didn’t expect any problems using such a well-known and widespread meme. Nevertheless, at the end of April we received a letter from the company Getty Images: At first they only wrote that they had noticed that we were using images requiring a license on our web page.  They asked us to contact Getty “in order to agree on a license fee for the usage of those images”. They sent an attachment with a copy of our blog entry and the original picture of the famous penguin. We uploaded a copy of the letter (which is in German) here: Page 1, 2 and 3.

Accordingly we wrote Getty an e-mail. As an answer they requested us to pay a license fee of 785.40 EUR for using the penguin (and continue paying or stop using it after one year). In case you are interested in the exact wording of Getty’s email (and if you can understand German), here is the email from Getty with this request: 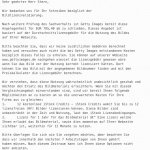 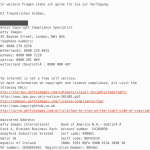 2. part of the email

Of course, 785.40 euros is a huge amount of money but at least they were fair enough not to contact a lawyer which would have cost even more. In Getty’s database the image can be found here where they also provide a calculator for license fees. According to this calculator you have to pay 460 Canadian dollar (which are approximately 308 euros) in order to use the image for three years on a commercial blog (Geeksisters is not really a commercial blog but at least it is run by a company – us).  Of course this is clearly cheaper but a doubling of license fees is not usual in this case.

But the Awkward Penguin is not just a random image we stole from Getty’s database, but one of the most wellknown internet memes. Therefore the question arises why obviously no one in the whole internet knows that the image right of this penguin are property of a picture agency that sends out bills for the usage of this image. Although it is possible to find information about the photographer of the penguin, it is impossible to find anything about Getty and their license payment claims. 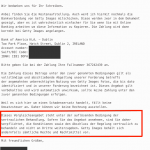 After exchanging some more e-mails with Getty the answer became clear: Since the legal situation appeared quite clear we agreed on paying the amount claimed and of course we deleted the images. As a result Getty pointed out that we were obliged to maintain silence about this case otherwise their lawyers would take over. :O

Of course that is something we can’t accept. We informed Getty that we would agree on everything (including the payment) except for the confidential treatment. Apparently this is not acceptable for Getty as they repeated their answer saying that in this case an agreement would not be possible and they would hand it over to their lawyers. Here is the presumed reason why it is not possible to find anything about this case on the internet: 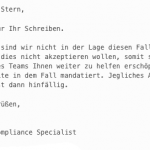 Getty does not want us to talk about it

Getty is simply threatening to contact lawyers in order to force the affected persons to maintain silence and just pay the amount claimed! Probably most bloggers will decide to pay the money and don’t mention it when faced with such pressure. Apparently this method is very successful but of course it will not work on us. We payed the license fee nevertheless, as already mentioned the images were deleted. Moreover we declared legally binding to Getty that we would not use the Socially Awkward Penguin ever again. Besides this we are now waiting to receive mail from Getty’s lawyers. Of course we will keep you posted about the outcome.

Here is a warning, though: It is not a very good idea to use the Socially Awkward Penguin. At least not the one with the penguin from Getty, which is why we made a new version which we are releasing under public domain. Here it is: 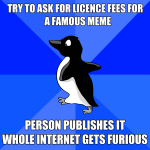 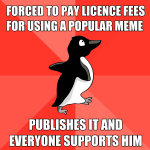 Feel free to use it for everything you like. You can download a blank version of the awkward version as a PSD or PNG and of course we also made an awesome version (PSD or PNG). If you prefer using a generator, you can find it here: Awesome, Awkward and even hybrid. Enjoy sharing without paying any fees :)

If you want to leave a comment, please go to the German version of this posting.